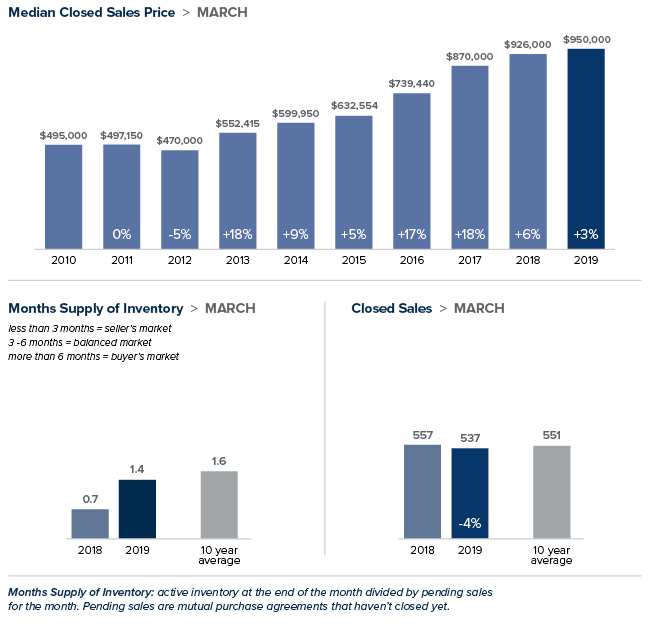 After months of softening, home prices began to rise in February. That trend continued in March. While prices in most areas were down from the same time last year, they increased over the prior month. New listings rose as well, offering buyers more options and more time to make the right choice. Despite the uptick in listings, inventory is still under two months of supply, far short of the three to six months that is considered balanced.

Unlike most of King County, home prices on the Eastside grew over the prior year. The median price of a single-family home on the Eastside rose 3% to $950,000. That represents an increase of $50,000 over February. Amazon’s plans to relocate its worldwide operations team to Bellevue is expected to add thousands of employees to their Eastside campus and put even more demand on what is already tight inventory.

The median price of single-family home in King County in March was $667,725. That figure was down 3% from the same time last year, but up from the $655,000 median price in February. The two areas that showed price increases year-over-year were the most expensive area in the county – the Eastside – and the least expensive – Southeast King County. The number of homes for sale was more than double that of a year ago, but still far short of enough to meet demand. 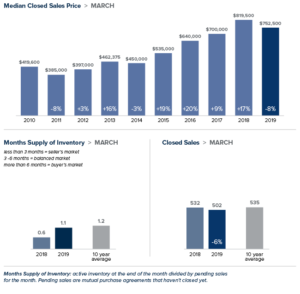 The median price of a single-family home in Seattle hit $752,500 in March, down 8% from a year ago, but up $22,500 from February. Inventory rose 136% over last year. Despite the increase, new listings that were competitively priced saw many multiple and contingency-stripped offers. 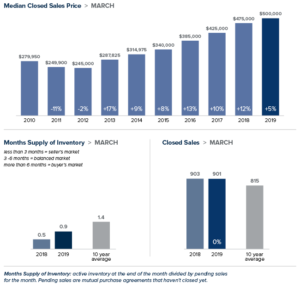 In Snohomish County, the median price of a single-family home grew 5.3% over last year to $500,000. That was an increase of $25,000 over February. A new passenger terminal at Paine Field is expected to provide a boost to the local economy and also lift demand for housing.

Related Articles
Windermere Bellevue Commons News Our Favorite Real Estate Podcasts Podcasts are a growing medium as listeners search for new sources of entertainment and information. In 2018 there were about 550,000 podcasts, in 2019 there are more than 750,000. Listeners are growing too, an estimated 20 million more people in the U.S. are listening to podcasts this year as compared to2018. This growth in audio entertainment inspired us […]
Windermere Bellevue Commons News Local Market Update August 2019 The real estate market continued to moderate in July. Inventory rose and home values softened, providing buyers with increased selection and more favorable pricing. With strong job growth and interest rates holding at below 4 percent, brokers expect the market to remain solid through fall. EASTSIDE The market remains strong on the Eastside. The current […]
Windermere Bellevue Commons News 2019 Home Buyers and Sellers Multi-Generational Trends Report tap or click image above to read the full report In July 2018, NAR mailed out a 129-question survey using a random sample weighted to be representative of sales on a geographic basis to 155,250 recent home buyers. The recent home buyers had to have purchased a primary residence home between July of 2017 and […]