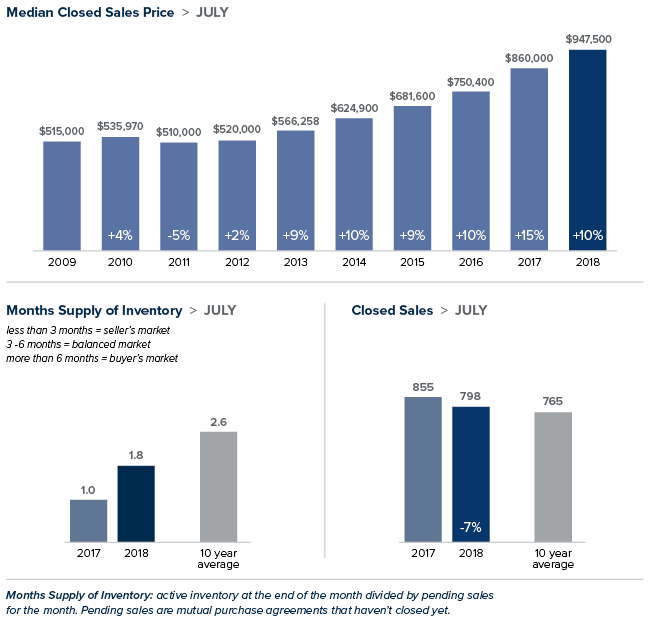 For the first time in years, the real estate market is finally starting to deliver good news for buyers. The region experienced its third straight month of significant growth in inventory. Homes are sitting on the market longer, prices are moderating, and multiple offers are becoming more rare. Despite the surge in homes for sale, it is still a seller’s market. Inventory would need to triple to reach what is considered a balanced market.

Inventory on the Eastside soared 47 percent over the same time last year. There was a slight increase in new listings, but the jump was mostly due to homes staying on the market longer. Price drops have become more common. With buyers having more choices, sellers need to work with their broker to make sure they price their home correctly the first time. After setting a new high of $977,759 in June, the median price of a single-family home dropped to $947,500 in July. While offering some hope that prices may have started to moderate, the median is still 10 percent higher than it was the same time a year ago.

King County saw the biggest increase in inventory in a decade, with the number of homes for sale jumping 48 percent over a year ago. However, at 1.5 months of supply that’s still well below the 4-6 months of inventory that is considered balanced. The median price of a single-family sold in July was $699,000. That represents an increase of 6 percent from a year ago, but is down 4 percent from the record high of $725,000 set in April. Perceptions that the market is cooling needs to be kept in perspective. Homes here took an average of 15 days to sell. 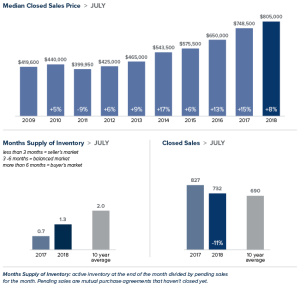 Seattle saw inventory shoot up 60 percent over a year ago, bringing the supply to its highest level in over three years. Even with the sharp increase, much more inventory is needed to meet the demand for homes in the city and sellers may well decide to jump into the market. According to a Zillow study, more than 97 percent of homes in Seattle are worth more now than the peak level before the housing market crashed. Median home prices are 29 percent above the bubble peak level with the median price in July landing at $805,000; up 7 percent from last July and down from the record $830,000 reached in May.

Snohomish County also had double-digit increases in inventory, though not nearly as great as King County. The number of homes for sale in July increased nearly 16 percent over the same time a year ago, but inventory continues to be very tight. The median price of a single-family home rose 9 percent year-to-year to $495,000. That figure is down from the record high of $511,500 set in June. A move towards a more moderated market is encouraging for buyers and an incentive for sellers to list their homes soon.

Related Articles
Bellevue Real Estate Local Market Update – September 2022 After its breakneck pace over the last two years, it appears the housing market has finally reached a soft bottom to the price corrections that began in April of this year. Reports that we’re entering a bear market are generally exaggerated, however, as the market seems simply to be resetting to a more balanced state […]
Bellevue Real Estate Local Market Update – August 2022 The summer continues to heat up, and patient buyers are being rewarded as market shifts create a new dynamic between buyers and sellers. After years of intense competition between buyers for the most desirable listings, increasing inventory and slower price appreciation across the region has caused a pivot, with sellers competing more strongly against each […]
Bellevue News Gardner Report Q2 2022 The following analysis of the Western Washington real estate market is provided by Windermere Real Estate Chief Economist Matthew Gardner. We hope that this information may assist you with making better-informed real estate decisions. For further information about the housing market in your area, please don’t hesitate to contact your Windermere agent. REGIONAL ECONOMIC OVERVIEW […]