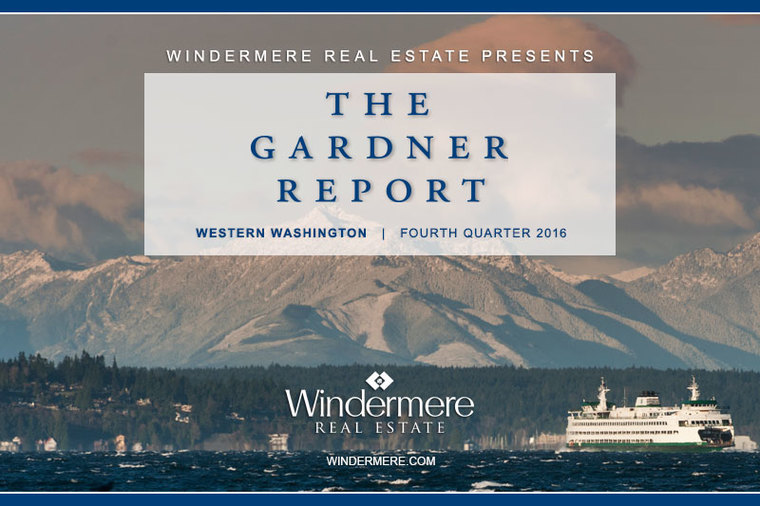 Here is a detailed overview of Western Washington Real Estate Market. Washington State finished the year on a high with jobs continuing to be added across the market. Additionally, we are seeing decent growth in the area’s smaller markets, which have not benefited from the same robust growth as the larger metropolitan markets.

Unemployment rates throughout the region continue to drop and the levels in the central Puget Sound region suggest that we are at full employment. In the coming year, I anticipate that we will see substantial income growth as companies look to recruit new talent and keep existing employees happy.

This speedometer reflects the state of the region’s housing market using housing inventory, price gains, sales velocities, interest rates, and larger economic factors. For the fourth quarter of 2016, I actually moved the needle a little more in favor of buyers, but this is purely a function of the increase in interest rates that was seen after the election. Higher borrowing costs mean that buyers can afford less, which could ultimately put some modest downward pressure on home prices in 2017. That said, the region will still strongly favor sellers in the coming year.

Related Articles
Bellevue News Now More Than Ever, “We’re All in, for you” Staying Connected Through COVID-19. All In, For You. In these times of social distancing, we are finding creative ways to stay connected. We have never been more “All in” for our clients and our communities.
Community Support Love Doughnuts? Seattle’s Top Pot Doughnuts Interview Right Here On the latest episode of the Windermere Home podcast, our host Brian Bushlach speaks with Mark Klebeck, Co-Founder of Top Pot Doughnuts. At Top Pot, they go all in by only crafting recipes using the best ingredients and precise techniques to create the highest quality doughnut. However, the attention to detail does not stop there […]
Forecasts 2020 Predictions: What Will Impact the Housing Market? This will be an interesting year for residential real estate. With a presidential election taking place this fall and talk of a possible recession occurring before the end of the year, predicting what will happen in the 2020 U.S. housing market can be challenging. As a result, taking a look at the combined projections from […]